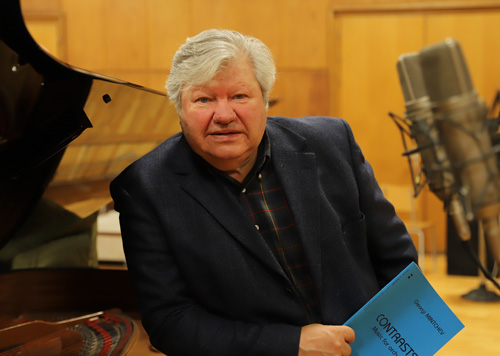 Georgi  Mintchev (b. 1939 in Sofia ) is graduate of the Bulgarian State Conservatoire in Prof. Marin Goleminov's composition class. Between 1968 and 1970 he majored under Rodion Shchedrin in Moscow and for several months he studied simultaneously under Aram Khachaturian. In 1972 he received a UNESCO music fellowship to further his education in the USA, Great Britain and France. At Le Conservatoire de Paris he attended the composition  class of  Olivier Messiaen.

Until 2000 he held the position, "Music Director” and “Artistic Director” of the Music production and Ensemles of the BNR. Many years was Secretary, Vice Chairman and Secretary General of the Union of Bulgarian Composers.

In 1989 Georgi Mintchev was honoured as "Onorevole Senatore Accademico" and was awarded the Lorenzo Magnifico European Prize of the Accademia Internationale Medicea in Florence.

He was been awarded the Grand Prize of the Bulgarian National Radio for Achievement and a "Golden Century" - the highest award of the Ministry of Culture.
In 2015, he was elected "Academician" - a Full Member of the Bulgarian Academy of Sciences.

He was awarded the title "Honorary Citizen of Sofia".